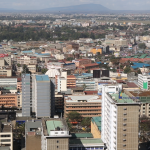 Urban Africans collects real stories about real people. Via a series of short documentaries, you’ll catch a glimpse of the diversity of everyday city life through the eyes of artists on the African continent.

Africa is modernising at a dizzying rate. Its mega-cities are dynamic and buzzing with technology and innovations. There are winners and losers, fast bucks and ambitious new businesses and construction sites. The population is young, connected and vibrant. Modernity and tradition create sparks as they live side-by-side.
The urban African artists we’ve portrayed are not afraid to challenge assumptions and conventions. Their innovative and creative minds turn stereotypes on their head. And most of all, they live their lives to the full.

You can watch all the documentaries on www.urbanafricans.com

In the rather conservative Kenyan society, John Kamicha is a taboo-breaking artist. His work is not just about having a nice picture on your wall. He wants to address essential issues: the domination of the Christian church, freedom to believe what you want and the right to be yourself without fear.
We met a very pleasant and frank man with big ideas who has the courage of his convictions and continues to strive for change.

You would say Barkinado Bocoum is all rock ‘n roll, but behind this exterior image is an ambitious and hard-working artist who has dedicated his life to art. His goal is to get beyond living hand-to-mouth and to be able to make a decent living from his work, which is not always simple in the big city of Dakar.

City life is the main source of inspiration for multimedia artist Piniang. He showed us around Dakar and pointed out the negative side-effects of the ever-expanding city.
We followed him to the neighbourhoods that are flooded each year during the rainy season. Finally, we breathed the fresh air of a rural area just outside of Dakar. This is where Piniang is building a future with his family and finds the calm he needs to continue his life as an artist.

Soly Cissé is one of the most renowned artists in Senegal. With his monumental expressionist paintings and sculptures he’s a huge success in his country and in the international world of contemporary arts. During the couple of hours we spent with him, he showed us around in the studio in his backyard.

Family, human relations and social issues are all themes in Armin Kane’s mixed media artwork. Much of his inspiration comes from street life in his popular neighbourhood in Dakar.
He is also convinced an artist has a responsibility towards society and he dedicates much of his time to giving art classes to mental patients at the Dakar hospital. We were lucky to witness his inspiring influence on this group of people ourselves.

We met Sidney Mangongo far from the bustling city of Nairobi, in his improvised studio behind the family’s countryside home. His work is inspired by the daily life of Kenyans and how it is reflected in the media. Sidney is a quiet, gentle young man, who is passionate about his art and struggles to keep going despite setbacks.

Chelenge lives in a beautiful home on the border of the Nairobi National Park, where she creates striking wooden sculptures. Here, in the midst of unspoilt nature, she leads a simple life inspired by her surroundings. She has always followed her own independent path both as a woman and an artist and hopes to be a role model for other female artists in Africa.
This short documentary gives an insight in her life, thoughts and dreams.

We met Miriam Syowia Kyambi, a multi-media artist with Kenyan and German roots, in her hometown Nairobi. She shows us around in the bustling city and in the remote place where she lives and works. While she talks about her ideas, her work, her rituals, we get a personal view of the artist’s way of life and of what she thinks is important in life.

There are not many female visual artists in Africa, but Kine Aw tries to make up for that on her own. She’s a passionate painter who dedicates her life to her art, despite the struggles that means for a woman in the conservative Senegalese society. She introduces us her family house and her other home, the Village des Arts, a community of artists in the heart of Dakar.

In Lungalunga, one of the most notorious slums of Nairobi, we met Shabu Mwangi. This young artist dedicates himself to his creative life as passionately as making his neighbourhood a better place. He divides his time between working in his studio and various social projects.

Spending a day with Shabu means being confronted with his fascinating paintings. We get a tour of the rubbish dump where he spent his childhood earning small change and visit an art workshop for kids. He wants to show them that a promising future is in their hands.